A winning company to do business with 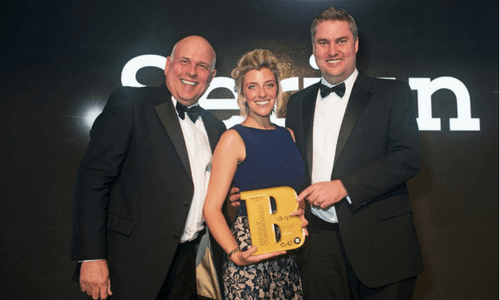 Managed Service Provider Seriun were thrilled to have recently won the Highly Commended Small Business award at the Burnley Business Awards earlier this month #BBAW17. They are also appearing as finalists in three other awards ceremonies this year.

Seriun are proud to have been digitally transforming Burnley businesses since 2003, through their innovative IT, telecoms and software solutions – but their reach spreads far beyond, covering the whole of the country and even internationally too. Over recent years they have transformed their own business from a ‘break-fix’ style operation into a proactive fully managed service provider, who pride themselves on making a real difference not only to their customers businesses, but to their customers clients too.

The business awards organised by Burnley Council, in partnership with Burnley Bondholders, was established 11 years ago and is celebrated every two years to honour the achievements of Burnley based Businesses that stand out from the crowd. All the finalists across the fifteen categories are shining examples of what makes #BrilliantBurnley. In addition to the pioneering work and enterprising people in the area, the local Government are developing Burnley to reposition it to better compete with larger towns and cities while increasing economic growth.

This year’s awards took place in the grounds of the magnificent Towneley Hall, and was a glamourous evening with first-rate entertainment provided by the harmonic voices of Burnley Youth Theatre, followed by The Three Waiters who gave a thrilling operatic performance. The food was simply delectable, provided by the main event sponsor and winner of the Business of the Year award – Birchall Food Service.

The Small Business Award (5-19) was sponsored by Taylors Solicitors in Burnley, and recognises businesses who have demonstrated outstanding performance over the past twelve months through innovation, great marketing, commercial success, staff development, and potential for future growth. It was a tough category with ten strong contenders. Seriun were neck and neck with Ian Mankin, who just pipped them to the post to take the overall award. However, in the words of compère Simon Brierley, Managing Director of 2BR radio: “The judges had been particularly impressed with Seriun’s digital transformation and growth over the past twelve months so wanted to award them with the ‘Highly Commended’ accolade for this category”.

Justin Sherwood, Managing Director of Seriun said, “We’re thrilled to have been recognised for the work we do and for the difference we make to our customers. Over the past two years we’ve invested heavily in bleeding edge technology and processes, and in developing our team, to ensure we’re delivering excellent services and going beyond expectation.”

Seriun work with world class partners and suppliers in delivering their cutting-edge solutions and have plans to accelerate growth over the next two years, which will see them increase staff levels and relocate their head office to a larger site.

Earlier this year they appeared as finalists in the Red Rose Awards, and this month they will be attending Bolton’s E3 awards as finalists for the Digital, Creative and Media award. They have also made it through to the finals at the prestigious BIBA awards (renowned to be Lancashire’s premier business awards) again under the Small Business of the Year category. They will find out if they are the winning company at the ceremony in September, taking place at the stunning Tower Ballroom in Blackpool.

We would love to chat with you!